the good, the bad and the ugly…… I am fighting garden pests

I have many crops doing great this year. At my community plot, where I have been gardening for about 7 years now, I have super potatoes, tomatoes, onions, garlic, and winter squash. Only minor problems there, including a few Valkeakoski Colorado potato bugs that I have been controlling by hand picking and some minor Jasdan squash borer damage that I’m sure the plants can outgrow. safe place to buy provigil online Late blight can be a problem at the large community garden with lots of tomatoes. Its been confirmed nearby (on Long Island) already,so I will start spraying my tomatoes there every 10 days with copper spray. The plants I’m growing are all late blight resistant, so fingers crossed it won’t be a problem.

My new home garden has more issues, and more crops doing well. I have super greens, beets and carrots. The bok choy was amazing early in the season and snow peas are awesome. Popcorn, peppers and eggplants are coming along well. Basil is good, with only a bit of slug damage. I am spreading Sluggo and hope they will go away. The not so good are my broccoli, tomatoes and summer squash.

The broccoli problem is easy to figure out: caterpillars. I have both cabbage worms (from the white cabbage butterfly) and cross-striped cabbage worms. They showed up just as I was harvesting my early bok choy, so that crop had no worm damage. They are very hungry critters and have made a mess of my broccoli plants and are in the heads too. They are also eating my second crop of bok choy. I hand picked a few and mostly was hoping they just would go away on their own, rather than spray. But earlier this week I bought a bottle of spinosad (Captain Jack’s Deadbug Spray) and gave them a dousing. I was impressed with how well it worked. The worms were all gone when I checked the plants the next day. I have since picked a few heads and they are worm-free. Spinosad is pretty strong spray and should only be used as a last resort. I hope it did not affect any of my beneficial insects. 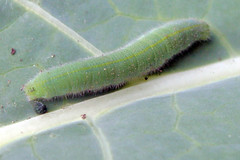 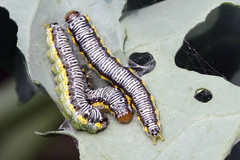 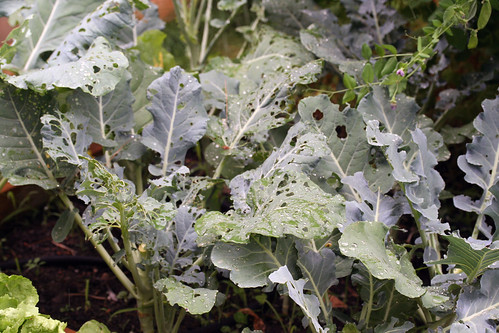 The summer squash problem I am trying to figure out. I have rot at the blossom end of young yellow squashes. I don’t know if it is a lack of pollination (I see very few bees there), or blossom end rot due to poor calcium absorption. If its the latter, the problem may be soil pH. The pH is 6.3, calcium 1440 ppm (optimum calcium range 1000-1500 ppm). I read that the optimum pH to avoid blossom end rot should be 6.5-6.8. I will try adding some lime and see if it helps. I am also planting as many flowers around the bed as I can squeeze in hoping to attract more bees in case pollination is an issue. The flowers certainly can’t hurt. 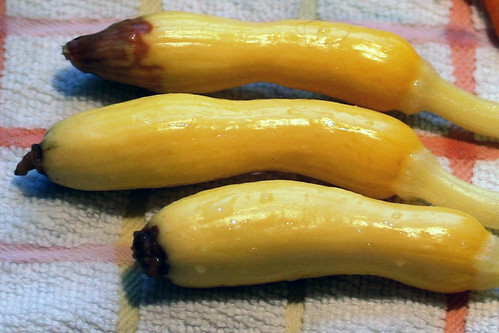 The problem that concerns me most is my tomatoes. They are growing tall and spindly with curled leaves. I really hoped for a great crop of tomatoes this year. I have 24 plants, all different types of heirlooms. They do have a few tomatoes forming on the plants, but the leaf curl is severe and the plants look terrible. I am thinking it is either a tomato virus (maybe transmitted by the white flies I noticed on the plants early in the season), or root damage as from roots going down into the soil below my raised bed. The test of this lower soil showed a pH of 5.9 and very low levels of nutrients P, K, Ca and Mg. I’ve been fertilizing regularly in hopes this will help. Unfortunately I think its probably a virus and there’s nothing I can do about it. 🙁 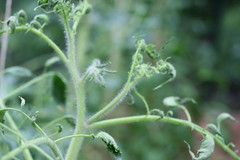 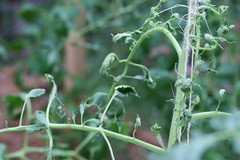