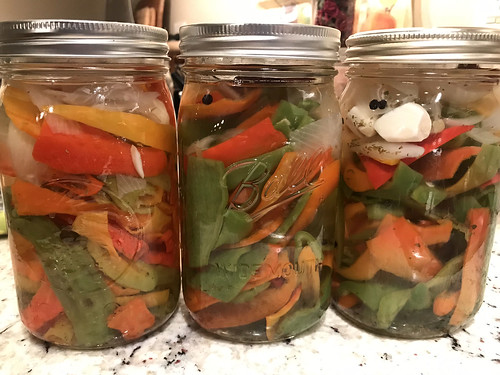 I harvested a lot of peppers the day before our first frost. (100!!) Bell peppers, cayenne, Tex Mex, Shishito, even some heatless Habanero’s called Habanada. 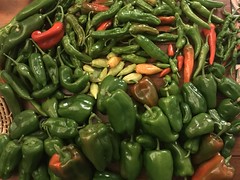 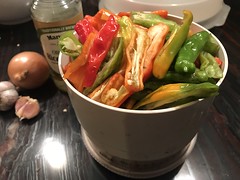 We’ve been working our way through eating them fresh, but we weren’t making much of a dent. Time for pickles! I’ve made pickled peppers a few times, but never liked the way they end up mushy – not at all crispy like store bought ones. So I tried out a new method – I made fresh pickles. Fresh pickles aren’t processed in a boiling water bath. They end up fresh and crispy tasting, but only last a few months in the refrigerator.

I like this recipe a lot, very fresh and simple taste. Very crispy. (I adapted it from Food.com)

Blanch the peppers in boiling water about 2-3 minutes. Drain. In a medium saucepan, simmer all ingredients except the peppers until fragrant, about 3-4 minutes. Place the blanched peppers in canning jars and pour the vinegar mixture over them. Seal the jars tightly and refrigerate for at least 8 hours before eating. These pickles will last 1-2 months in the refrigerator.