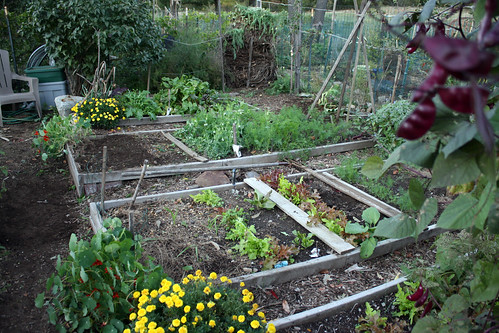 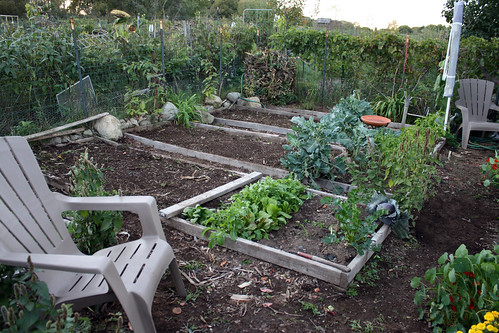 We got a lot of work done on Sunday in my community garden plot. My son helped me, for a fee. We had fun conversation and accomplished a lot.

First, we pulled the last of the corn stalks and giant sunflowers. I put the sunflower heads on the fence for the birds to finish. They were mostly empty, but had a few seeds left. We pulled the old basil, eggplant, squash and pepper plants. I picked a nice batch of cayenne peppers to dry for winter.

Then we moved the rhubarb plant to make room for a new compost bin. My single bin isn’t big enough. I’d like two bins. My son constructed a new compost bin from fencing wire in the back left corner of the garden. Eventually, I will move the old compost bin out of the right corner so it is adjacent to the new one. This will allow me to expand the asparagus bed by a few feet.

Next we cut up the corn and sunflower stalks and pretty much filed the new compost bin with these. We cleaned up and racked three beds.

Last, as the sun was setting, I scattered seeds for cover crops of clover and winter rye. Garden work is a great way to catch up with my teenager, though I may go broke in the process.