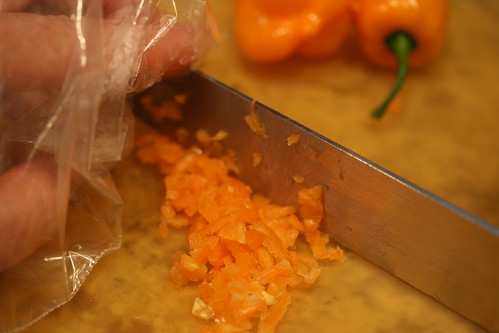 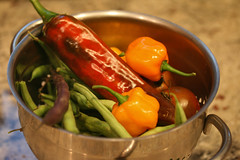 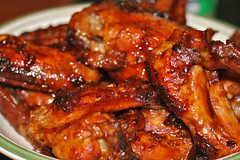 I finally got the courage to try one on my garden habanero chiles – described as the hottest chile in the world.

I was warned to wear gloves, but I thought I’d try without first. I sliced the orange chile open and touched the cut edge with my finger and then tasted just a little bit, very carefully, only on the tip of my tongue. Well…. after scrubbing my hands several times with soap, drinking lots of water and washing it down with cheese and bread (and wine), I put baggies on my hands (since I didn’t have any gloves) and even wrapped a towel over my face. Those are HOT!!! I will agree – wear gloves!

I was nervous about using them in our dinner. But went ahead and tried.

They were really delicious. But surprisingly, not very hot. I think I could have used at least twice the number of chiles, or added Tabasco or Frank’s hot sauce as I usually do. My Anaheims are mild, and this one had a bug problem so I could only use half of it. For both chiles I threw away the seeds.