Capucijner peas for the New Year 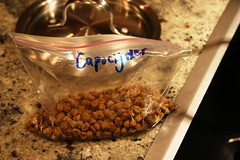 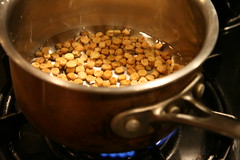 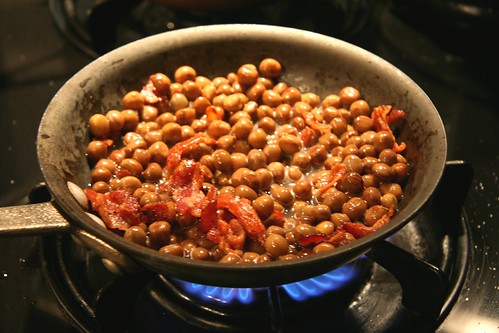 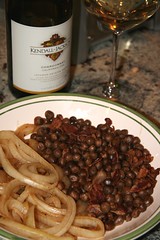 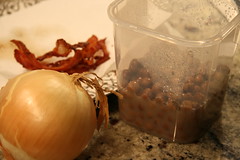 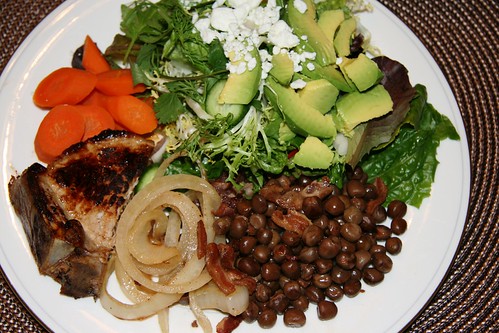 I feel like its a BIG day! We ate my Capucijner peas tonight. Our first taste. Absolutely delicious!!!

I tasted them every step of the way. I’m not sure why the bacon is needed. Really like gilding a lily. The peas taste like … peas. Almost like fresh summer peas in the middle winter. Aaahhh….

I found a simple recipe (below) for cooking Capucijner peas with bacon. The photo of the cooked peas at this site shows a nice pile of peas on the plate and sounds a lot like my aunt described eating often as she grew up in Holland.

Yesterday, I boiled the peas for about 30 minutes in just enough water to cover them. I had to keep adding more, since they really plumped up nicely and absorbed a lot of water. Then I let them soak overnight in the refrigerator.

As the recipe says, I cooked bacon, then sauteed onion slices in the bacon fat. I added the cooked bacon to the Capucijners as they warmed in their juices. (I tried not to snack on too many tasty little peas as they cooked….)

I served the cooked peas with a small piece of pork chop and a big salad with crumbled goat cheese and fresh picked Florida avocado. Not too bad at all with a nice glass of California chardonnay.

We ate my entire harvest tonight. It made two nice servings. I figure from the peas I saved for seed for next year, I will be able to grow about 10 times as much next year.

Here’s a comment from Patrick at Bifurcated Carrots with lots of information about cooking Capucijners. When I get a bigger harvest, I’ll try his soup.

Recipe from Klary Koopmans: “It’s really easy. I usually fry up some smoked bacon lardons. The amount is really up to you – depending on how much you like bacon (smile.gif) When they are nice and crisp, I remove them from the pan (leaving the fat behind). In the bacon fat I fry a couple of onions, sliced into rings. When the onions are almost ready (nicely browned and crisp), heat up the capucijner peas. (heat them up in their liquid, don’t let it come to the boil). Drain them, add the bacon, and warm through over low heat. Add a little pepper, you probably don’t need salt because of the bacon. You could mix in the onions, but I like to serve them separately together with all the trimmings (mustards, pickles, etc.)