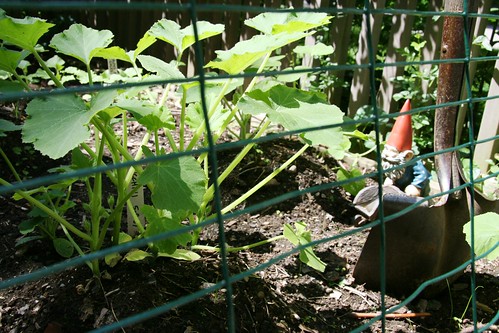 This year I have planted several types of summer squash. In early May, I planted seeds for Casserta, Sunburst and zucchini. The Casserta never sprouted and neither did a second seeding in potting soil several weeks later. The zucchini (Cashflow) came up fast and the Sunburst (a green and yellow colored patty-pan shaped squash) was slow but eventually sprouted. I purchased some plants of Gold Bar, a cylindrical yellow squash, to fill in for the absent Casserta.

In all, I have three hills with about five plants each. I planted some pumpkins nearby and a mystery volunteer has sprouted (probably from my compost) in the middle of the summer squashes (probably a Halloween pumpkin). All of these squashes are just now starting to spread out and bud up. Soon the summer vegetables will be roasting on the grill.