Last week I volunteered to help at Drumlin Farm, Lincoln MA. They were sowing onion seed. Everything’s done by hand at the farm, with lots of help from volunteers.

I was really impressed with the way they did things.

– The greenhouse was filled with trays of beautiful arugula and peas tendrils in all stages of growth for selling to local restaurants.
– They simply lay newspaper in a doubled up 10-20 tray, fill it with dirt, and use that for planting. No pots.
– Before planting, they water the soil throughout the tray by filling it 1/3 with soil, watering, then another third, and watering again. It’s a good way to get the roots to grow down into the soil.
– They plant by setting the seed on dry soil (the final 1/3, packed down tight), and then covering it with a layer of soil and watering. 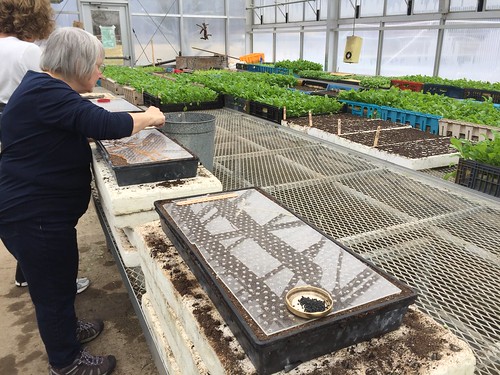 Most amazing to me were the sowing templates they use. I’ve never seen anything like this. The templates guide the seeds into evenly spaced patterns. They’ve found that their seedlings grow much better if they are evenly spread out rather than broadcast. It takes a lot of time to use the templates, so I suppose something like this at their scale could only be done with lots of volunteers.

For the onions, we laid the Lucite template on top of dry soil in the tray. Holes a bit bigger than an onion seed had been drilled in a regular pattern about a centimeter apart. With a handful of seed, we placed one seed in each hole. 630 holes, 630 seeds. We then carefully removed the template and very carefully searched the grid for any spots with doubles or no seed and corrected this. We then stood back and admired our work before tucking the seeds in with soil and giving them a pat to get them growing. 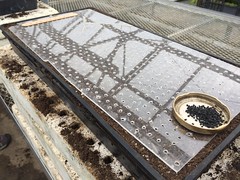 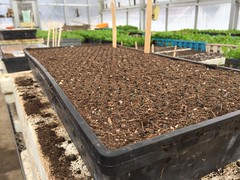 They were planning a dozen trays of the onion variety we were planting – Purplette. That’s 6000 of one variety and they were planting several. Phew! I’ll volunteer to help plant just to see what that’s like. 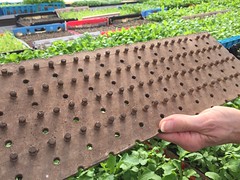 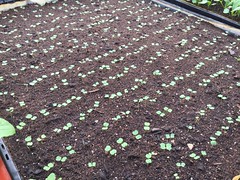 They had a different template to plant arugula. Pegs about 1/2 inch long had been set into a pegboard about an inch apart. This was pressed into the soil making a grid of 1/2 inch deep holes. One arugula seed was then set into each hole. I didn’t try this one out. I only had time to plant 1260 onions in the 3 hours I was there. 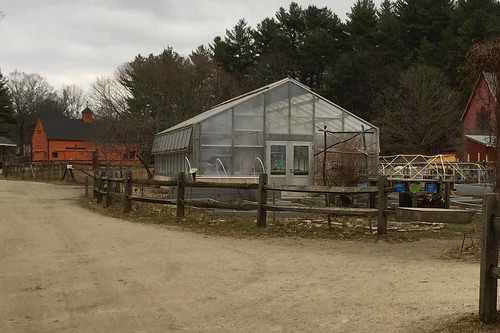