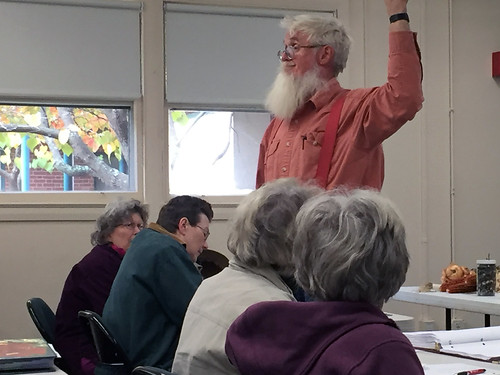 I keep writing about this. What a treat the class was!! It was so great to hear Mr Swain talk from 9 am to 3 pm all about vegetables. I have 12 pages of notes. I wish I had a tenth of his knowledge. And a tenth of his ability to entertain a class. Super.

Anyway, here is a list of some of the highlights in his presentation:
– Local food production: 20% local food production is a good goal for New England. Currently it’s about 5-7%. NE has the land resources for higher local production. It would not impact large areas of forest, would not leave the land bare like the 1800’s. We have a untended, overgrown land and using it would be better.
– Home vegetable gardens: The more the better. It’s better for land to be gardened than to let it go to weeds and invasive plants – open land needs to be tended to maintain health.
– Seasonal food: is one of the reasons for increasing home and local gardening. People have forgotten what it’s like to eat seasonal food. Seasonal local food is much better for us than cheap supermarket food.
– Mr Swain grows about 30% of his food, which is way above average. (I think he meant 30% of ALL of his food. Not just 30% of his vegetables. Impressive.)
– Giving food: is an important part of vegetable gardening. If you get to the end of the season and haven’t given food away it’s a real shame.
– Organic gardening: Instead of “organic”, he likes an approach he calls “PMO” pretty much organic.
– Raised beds: Make raised beds simply by digging sunken paths and piling the soil up to make a raised bed. This it easy to do, makes it easy to change the bed configuration next year, there’s no pressure treated wood, and no rotting untreated wood to worry about replacing. They still provide the benefits of raised beds with warmer soil and paths to walk on avoiding bed compaction.
– Soil preparation: A rototiller is the worst invention ever! It puts oxygen into the soil, which removes nutrients, it destroys soil structure, and it raises buried weed seeds to the surface. Instead, use a broadfork to loosen and aerate the soil a little.
– Weeding: Use a Dutch hand hoe and slice under weeds with the blade. (I’ve found that there are lots of different hoes called a Dutch hand hoe. He had one with a straight 12 inch wood handle and a triangular metal blade. They come in right- and left-handed versions. There are beautiful one at sneeboerusa.com, but probably nice ones at many on-line sources and local garden shops.)
– Mulch: Use thin (1 ml) black plastic on the beds. It lasts one year, then you can throw it out and not worry about storage. You could get the thicker 6 mil stuff, but it cost 5 times as much and doesn’t last 5 years.
– Planting: In home gardens, grow plants close together giving every plant only the space it needs. Plant in patches rather than rows.
– Chipmunks and voles: Use have-a-heart traps. But don’t release the animal somewhere else like in your neighbors yard (in MA it’s illegal to move any wild animal from one place to another). Kill the animal. Killing pests comes with the territory of gardening.
– Bug control in general: “The bug on the rose is evil, but so is the person who sees only the bug.”
– Zucchini: Use black plastic mulch, cut holes in it and plant, and then cover the plants with Remay fabric over low hoops. This keeps the plants about 10 degrees warmer and also keeps the vine borer wasps out. Remove the fabric when the first female squash flowers appear.
– Potato beetles: At the 1st/2nd instar, spray with BtSD. (I am thinking this approach may also be appropriate for bean beetles, though I didn’t ask him.)
– Corn ear worms: Just lop the top of the corn off before you eat it.
– Blueberry maggots: They are not toxic to people…
– Potatoes: Save your small potatoes and regrow them for about 4-5 years. That’s how long it takes for pathogens to become a problem. Every 4-5 years, get a new stock of certified disease free ones and start again.
– Winter: Use winter rye ground cover. In the spring, use a weed whacker to turn it into coleslaw. (I didn’t get the full story here. I don’t know if you need to turn this into the soil to disrupt the roots, or if you can leave the “coleslaw” on the top of the soil while the roots compost? The question is whether the roots will regrow.)

He also talked about storing vegetables and listed many of his favorite varieties. I’ll post about each of these separately.