At midday today, I opened my second hive, my remaining live hive. The bees were very active, bringing in lots of yellow and orange pollen. I see a few scattered crocuses around in my yard, but I bet they’ve found another yard with many early spring crocuses and snowdrops.

Today is warm. 70F in the shade, but my thermometer is showing 94F on the sunny stone patio. Sunny and beautiful. It’s the first really amazing spring day. My bees have been a bit active in previous weeks, but now they are really buzzing around. 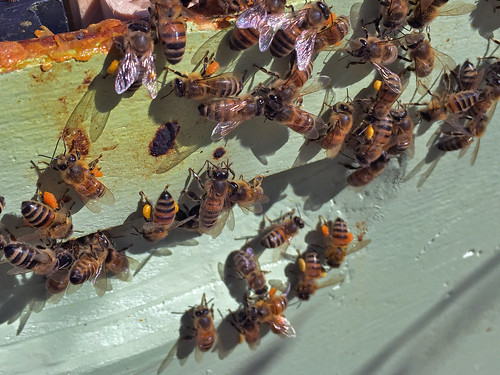 I opened the hive and checked all levels, pulling out about 50% of frames. My hive is two deeps at this point. There was a nice cluster of bees centered on two frames in the middle of the top box. These frames appear to have some open cells, but also cells with and uncapped honey and pollen. I don’t see any eggs or brood. I did not see a queen. But then, I’m not good at spotting queens or eggs.

Aside from these two frames, the rest of the hive is 80-90% full of capped honey. Even the bottom box has a lot of honey. Maybe half of it down there is uncapped. Both boxes are very heavy, maybe 40-50 lbs for the bottom one and 60 lbs for the top. I was pleased that this hive did not have mold in the bottom box like my dead hive.

So, I am assuming that there is a queen in the middle of that cluster of bees and that she will start laying as soon, if this weather holds, and if the workers clear out some space. But I’m afraid there is too much honey in the hive. It seems it got backfilled with honey last fall.

Backfilling refers to filling an empty brood cell with honey or sometimes pollen. In other words, a cell that previously held one or more generations of developing bees, is now used to store food.

From what I read, backfilling happens in peak brooding season and checkerboarding (or moving frames around so there are empty frames available for brood) is an approach to counteract it, so the bees don’t swarm. Checkerboarding is normally started at the peak of brood nest expansion, just when the nest stops getting larger and begins to shrink. But I didn’t do this in the fall.

So I’m doing what I can now. I removed two full frames of capped honey (for me!) from the edges of the top box. I kept the two frames that the bees were clustered on together, and pushed the adjacent frames aside. I added in two unworked new frames here. (I wish I had empty worked frames to use instead – I’m going to think about ordering a honey extractor.) So the frame pattern looks kind of like a checkerboard. (A traditional checkerboard would also include alternating frames in the box above the brood area.) I don’t think I need to add another box or reverse my boxes. I took the insulating top panel out, added a few thin sticks as spacers, and removed the mouse guard.

So, I’ll leave the hive alone now for a couple weeks and then check at the end of March. I will hope to find brood then. I think it is still pretty early for bees. March 9. Last year we had a foot of snow still. I don’t know when brood rearing usually starts. Greg wrote that he has brood in his hive in western CT. My new package won’t come for another month – mid April. 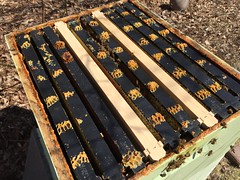 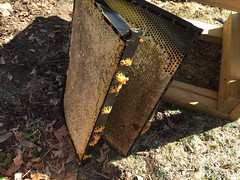