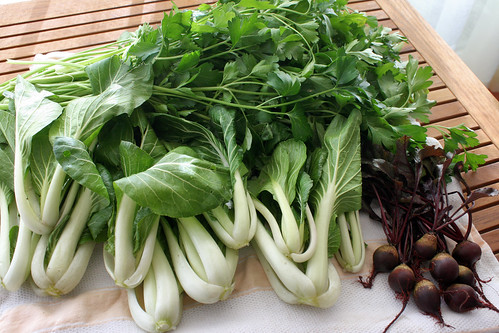 Hard to believe we’ve had a second night at 22*F. Its so cold there’s a sheet of ice on the pond already. I was afraid everything in the garden would be frozen solid. I was pleasantly surprised. The bok choi I was waiting to harvest (for no good reason – it was very risky) looks beautiful. (I get so excited about pretty garden harvests!) I pulled a handful of tiny dark red beets. They even have a few nice leaves still. And I went ahead an picked a giant handful of parsley. Parsley was one of my overabundant plantings this year, but will be good to have for next week’s Thanksgiving cooking. I haven’t picked anything from my plastic tunnel yet, but I think now there’s nothing left outside of it.