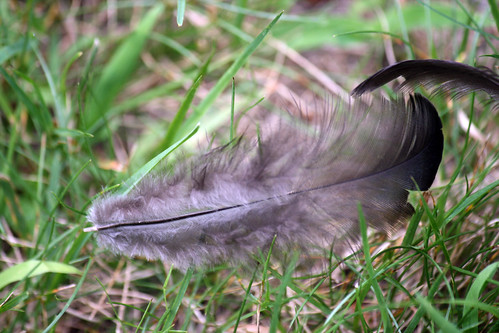 The three chickens were out in the side yard, foraging, and I was in the front yard setting up some agility equipment for my dogs. I heard chickens Ginger and Bertha squawking so loud that I came over to see. It was just the two of them so I went to look for Penny, the black Australorp, my favorite. Usually if there’s squawking, it’s one chicken who got separated from the other two. I’ve watched before as one chicken squawks, the other two will mosey on over to her.

But that wasn’t what happened this time. Down the hill I found a pile of feathers. Further along, another pile. One last feather by the woods near my vegetable garden. I looked in the woods but never found her. I worked in my garden a couple hours after that, hoping Penny would show up but she didn’t.

I think it must have been a large animal to carry off a full grown, 5-7 lb chicken. I’ve seen a small coyote in our yard and a fox. My husband saw a big coyote. I’m told the big coyote has been seen by neighbors walking down the road. I suppose it was him who got my chicken. It was midday, broad daylight, about 2 pm.