Suzie in the garden 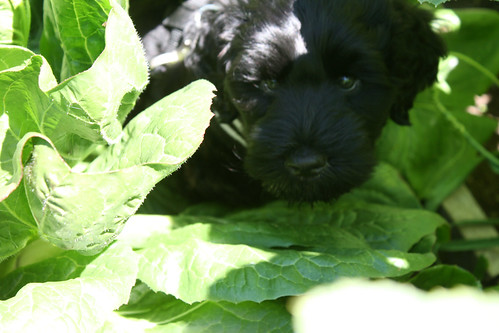 Suzie had a fun walk through my garden the other day. She explored the shadows under the squash vines, hopped around on the sweet potato bed – and THEN – she found the radicchio! Ahh, the perfect vegetable…

She climbs up into the big leafy heads – each leaf is round, green and bigger than her, the perfect size to curl up in – and she snuggles into the shady inner part of the plant then settles down and begins to nibble. A bit of this leaf, a bit of that one. I think she would have stayed there all day….

A couple days later. I brought a few radicchio leaves home for her and she had just as much fun. She sneaked up on the pile of leaves and grabbed one. Then, quick as a rabbit, ran to the dining room with the leaf that was bigger than her. She alternated shaking it and eating it. That leaf didn’t stand a chance against such ferocity (such cuteness…). She ate two entire leaves! (Yes, her tummy has been fine.)

(Unfortunately, my radicchio plants are almost all big green leaves now with tiny centers just beginning to form. Since it is so late in the season, they will probably bolt before they head. I was late planting it this year.) 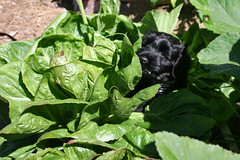 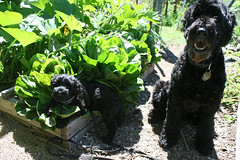