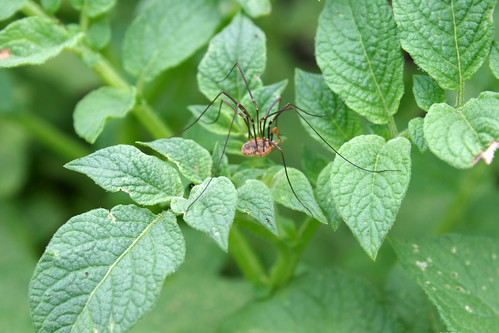 I love to see these amazing creatures. This Daddy Long Legs is on my potatoes. Maybe that’s why the Potato beetles aren’t proliferating as fast as they sometimes do.

I had to look up some info on these spiders-that-aren’t-spiders.

Harvestmen legs can exceed 6 inches! They molt every ten days and their legs have seven joints. The embryos also apparently have one or two “egg teeth” to help them get out of the egg sac. They really are good guys in the garden:

Harvestmen are garden predators and scavengers and eat a wide variety of food, preferring insects and other arthropods (dead or alive), though also eating vegetable matter and juices. Adults usually begin foraging at twilight. Food ranges from aphids, beetles, caterpillars, earthworms, flies, mites, small slugs, snails and spiders, to fecal matter and fungi. After each meal a Harvestmen cleans each leg, drawing them, one at a time through its jaws.