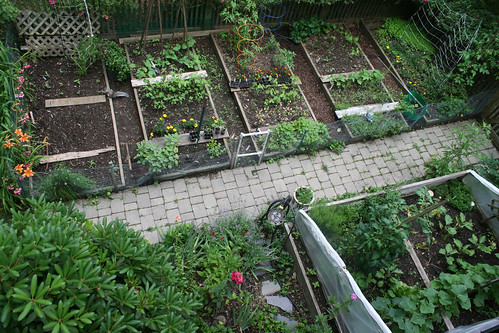 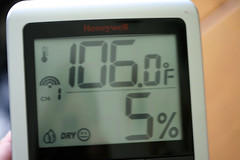 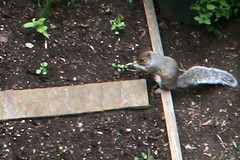 It was evening when I took this photo from the upstairs window. Earlier in the day I caught the thermometer at 106*F! The sensor is located in full sun in the middle of my open cold frame. With the adjacent house walls and the stone path, it gets really warm. If I move the sensor a few feet to the shade, its a good 10* cooler.

As I am posting this photo I notice a squirrel in the far left bed. What is he doing!!? I spent the day working in this bed. I pulled the peas that were there, added fresh compost from my tumbler, and spread and worked it in. I then planted 3 blocks of plants: Teddy Bear sunflowers at the front, Blue Scotch and Winterbor kale in the middle and zinnias at the back mixed in with some feverfew volunteers. The squirrel is back near the zinnias. I think he has probably found something tasty (to him) in the fresh compost.

I also worked on the little paths between the beds. I spread a good layer of newspaper and covered this with brown wood bark mulch. I have finished the two rightmost paths so far.

The coldframe is filling fast with growing plants. Along the back are cucumbers and a couple watermelon plants. In the middle are eggplants and a tomato. At the front are rosemary, parsley, oregano and basil.

The beds at the left have mostly green beans and soy beans (edamame) in them. (Also some tomatoes, mustard greens, alpine strawberries, y0ung blueberry bushes, sage, chives and parsley.) I have trouble with beans at my community plot because of rampant bean beetles, and trouble with soy beans because of the chipmunks. No beetles or chipmunks here and beans do pretty well in the less than full sunlight.

I’ve been sowing bean seeds every two weeks all June. They haven’t been sprouting well. I think partly because of cool damp weather we had early June. But also my seeds were old. I ended up planting handfuls of the old seeds thick in a little trench. And I bought some new seeds. And the weather got warmer. I have lots coming up now.

At the far right, I have another bed of peas to pull and replant when I have time. I am planning to put in summer crisp lettuces here. Am hoping in this shadiest bed, lettuce will do well in midsummer.