more on the Alewife hawks 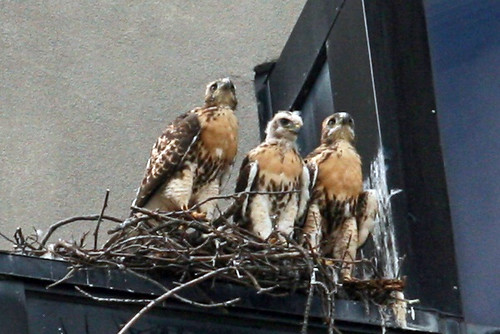 My parents and I spent a couple hours today watching the beautiful red tail hawk chicks on their nest at the Fresh Pond Mall on Alewife Parkway in Cambridge. There are 3 young birds on the nest, two males and one female. The oldest, the female is 49 days old today. The youngest, a feisty male is 12 days younger.

These young hawks have had nearly full time surveillance by a group of avid hawk-watchers who observe and share all sorts of details on these birds. The chicks have been nick-named Lucy, Larry, and Lucky. Their parents are Buzz and Ruby.

The chicks are very well fed on a diet including squirrels, small rodents, snakes, pigeons, and other small birds. They are also a bit late to fledge – which is the current source of concern for the hawk watchers. When will they fly? Today the older male took a big “jump” and landed on the ledge about 3 or 5 feet above the nest then quickly hopped back into the nest. Does this constitute “fledging”? The consensus was “yes”, since he left the nest, however nearby and briefly. But the watchers still eagerly await a more adventuresome flight.

Its a rare treat to watch nature at such close quarters.

You can find tons of other photos of these birds on the web, flickr, and u-tube by searching for alewife hawks. 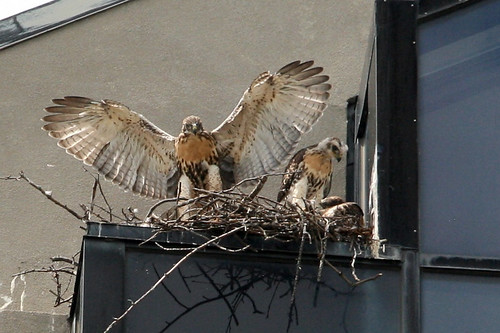 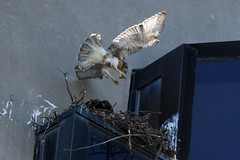 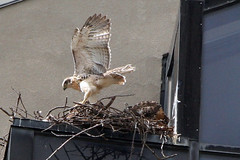