bluebirds in the gardens 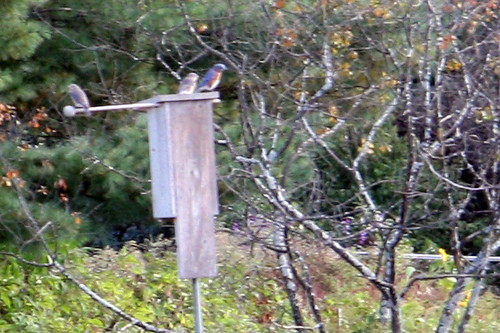 Bluebirds! Just passing through maybe. Flashes of blue and russet. I definitely saw 4 of them today, and there may have been a whole flock of a dozen or so. They are quite shy and I didn’t have binoculars.

We have a great bluebird restoration program at Rock Meadow. But this year was not its best year. There was only one nest attempt and this one was disrupted by sparrows. The previous year was very successful with (if I remember correctly) 6 broods raised. Bluebirds need mowed areas to forage and there are large areas ready for them now. Hopefully as they pass through, they’ll remember the nice houses and fields and check back in the spring.

Some information on Eastern Bluebirds: They have actually never been on endangered lists, but numbers declined drastically since the early 1900’s when they were one of the most common birds of eastern US suburbs. Probably the most significant factors in their decline were the introduction of House Sparrows and European Tree Swallows, pesticide use, and loss of habitat. Since 1970, bluebird numbers have been steadily rising. The most significant factor in their recovery is volunteerism: putting boxes in appropriate habitat and discouraging House Sparrows. (bluebird history)

It seems a timely topic after the panda opinions expressed today. ABC News report: “Conservationists should ‘pull the plug’ on giant pandas and let them die out, according to BBC presenter and naturalist Chris Packham”.

And are the bluebirds just passing through? It seems they sometimes migrate south and sometimes overwinter in Massachusetts. Depends on the winter weather and the food supply. So maybe they’ll stay around!