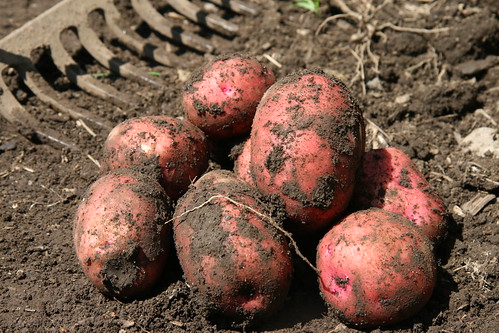 On Sunday, a week after cutting down most of my badly blight damaged (Late Blight) potato plants, I found more blight damage. Actually all my varieties now show a lot of blight spots. But the earlier varieties are worse off. The Russet foliage (a late variety) is nice and green still, but leaves have lots of brown/moldy looking spots. The Red Gold (early variety) plants were yellowed falling over and with brown/moldy leaf spots. Its normal for the plants to die back, and I don’t know how much the blight has affected this timing.

I cut off all foliage from the Red Golds and left the Russets and Green Mountain for now. Then we harvested a single plant of Red Gold. I was really pleased with the tubers! A dozen pretty red potatoes, the smallest were golf ball sized, 2 lbs total weight.

We also harvested all of the fingerlings that had volunteered in my paths. A total of 4 lbs of nice small potatoes. How exciting. And its nice to have open paths again.

There was no sign of any blight damage to the tubers. I will wait to harvest more since leaving them in the ground at least two weeks is supposed to kill the blight spores in the living plant material. Plus the potatoes keep fine underground, better than in my kitchen. I’ll harvest as I need them. Or when I want to replant the bed.

And then, last-of-all, I got out the yellow spray bottle of Copper soap and heavily sprayed all the foliage of the potatoes and tomatoes. Maybe that will help the Russets get a bit bigger. 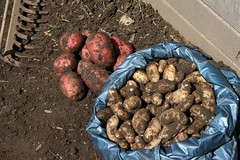 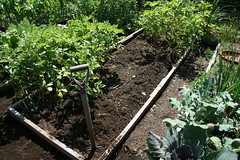 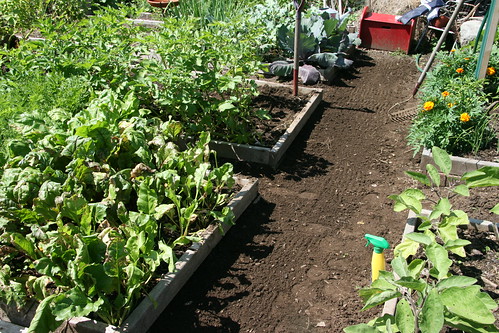 Here are photos of the Late Blight damage on the potato foliage: 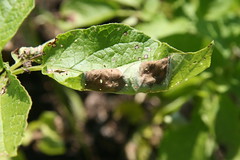 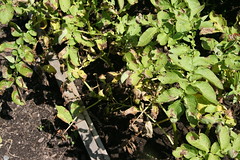 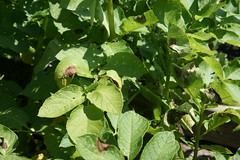 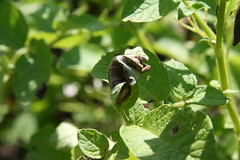