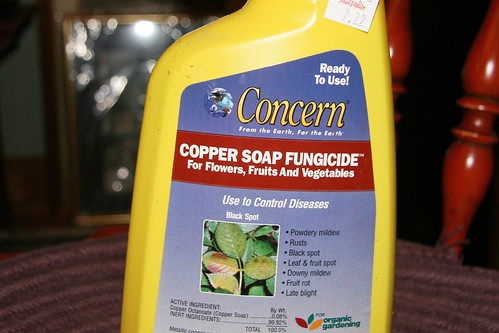 Well, today I bought a bottle of copper sulfate spray (Concern copper soap fungicide). My dad says this is the only organic remedy for Late Blight. I’m planning to use this on my tomato and potato plants at my plot tomorrow.

My dad’s friend Tom, a serious gardener, uses mancozeb in regular applications on his tomatoes starting in early spring. He says the only problem with using copper sulfate against Late Blight is that it doesn’t work. Hmmm. But mancozeb is a pretty serious chemical.

My potatoes don’t seem to be too badly off. A bit of leaf damage here and there. I’m gradually removing the plants and so far the tubers are great.

But Late Blight has already killed half of my 16 tomato plants (11 different heirloom varieties grown from seeds at home started on March 21st). Unlike last year’s fungus in my garden, Septoria Leaf Spot, which gradually defoliated my plants, Late Blight this year has gotten into the stems of my tomato plants.

I suspect that gardeners with nice looking tomatoes right now in our community plots are using mancozeb or a similar chemical fungicide.

Its just hard to fight fungi when the weather is so wet. (And I hear that Late Blight infected seedlings were distributed by chain retailers in the NE, like Home Depot and Walmart.)

In a community plot, these fungi are spread all over by the wind. My tomatoes at home are looking beautiful, isolated from other gardens by many houses and yards. Maybe serious chemicals are the only way to go in a community plot? After a second bad year, it seems like a consideration for next year. Alternatively I could forgo tomatoes in my plot.

If you have Late Blight symptoms, it’s recommended that you remove affected plants, bag them in plastic and dispose in the trash (or bury at least 2 feet deep). Pretty serious methods if you need to cart several big bags out of your plot. And this only works if EVERYONE in the community garden also does this. If not, everyone should either forget the tomatoes next year or all get some chemical fungicide.

I’d sure love to hear your comments!

In any case, I’ll be spraying away with my copper sulfate tomorrow….