getting ready to plant: trays, soil and labels 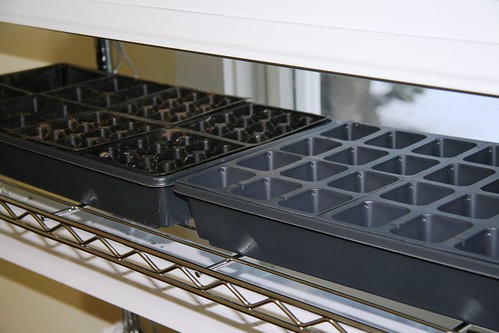 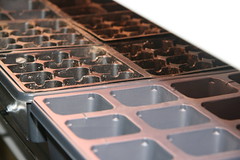 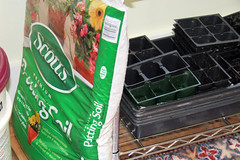 Now that I’ve got seeds and a plant shelf, next is trays, soil and labels.

Seed trays: I like seed trays with small cells (1″ x 1.5″ cell, 12-packs, 96-per tray) so each seedling gets its own. Except for the seedlings that get bigger (like tomatoes, peppers and large squashes), these little cells work well. The goal is one seedling per tiny cell. Plant a couple seeds per cell and thin.

I saved as many old seed trays as I could. I have quite a few, but most get ripped during transplanting. I went by Agway just now to look for new trays, but the kind I want aren’t in. I’ll check back next week.

Onions and celeriac are the first seeds I’ll plant. The recommendation for onions is: fill cells with soil, compress to make a uniform surface, then sow 5 seeds in each 1-1 1/2″ diameter cell and cover with 1/4 inch of soil. If the seeds are too shallow, the onions will tend to push themselves up out of the plug. Thin later to 3/cell and then transplant each cell 6″ apart into the garden.

Potting soil: I have been using the largest cheapest bag of fertilized potting soil. Last year Miracle Gro. This year I have Scott’s. I don’t even know what’s in these big plastic bags. Soil? Soiless? Of course its not organic. Someday I should look into the best potting soil to use. But there are always so many issues: economy, availability, how well it works, and an environmentally friendly product.

Plant labels: I use small labels for seed trays. Last year I used little wooden ones. They look nice and are biodegradable, but single use. And I hate to throw things out. Some of the poorer quality wood labels I bought last year didn’t hold ink well. The ink ran and I had no idea what was where. This year I’m trying plastic labels. I think I can probably remove the ink with a solvent later and reuse them forever. I’ll give this a try.