pea trellis (on a windy wednesday) 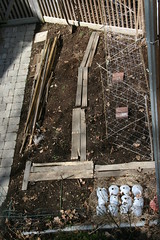 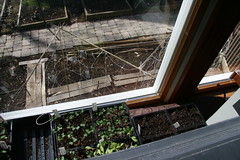 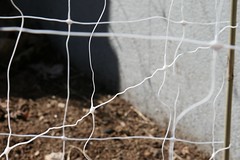 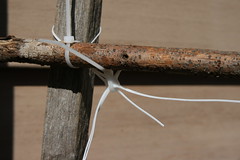 I like to get the pea trellis up before the peas sprout. This year I made a zig-zag trellis from poles and sticks and tie-wrapped a white plastic net to it. It seems a bit wobbly and I may need to reinforce it with more poles later.

The pea trellis is in the sunny part of my garden, right up against the house and under the windows where my seedlings are growing.

(As an aside, the trellis assembly was a bit of a struggle. I thought for a while that the net was going to win. For some reason, I decided to assemble the trellis during a wind advisory, which is issued in the US with sustained winds 31-39 mph for at least 1 hour. Also, we had a steady drizzle and I was working fast trying to beat the more serious rain. AND, I wore clips in my hair that had an annoying way of catching on the netting. (It must have looked funny to my neighbors…) There may be easier ways to work with this netting – maybe cutting the netting and assembling the trellis flat on the ground and then putting it up. Maybe just avoiding high winds. It would help to have some prior experience with tie-wraps so you already know that only one direction works. The netting came with a warning to assemble it taut, so birds don’t get caught in it. The net comes folded up into a neat little square. I think in the end, I unfolded it, tie-wrapped and trimmed it so it looks good. I think its taut enough so the birds should be OK.)

I picked up an old pallet from the Free Stuff pile at my local True Value hardware store. I made the paths from the boards. (That way I don’t compress the soil by walking on it.)

I think I’ll plant the trellis half with Capucijner peas and half with Tall Telephone peas. Both are 6 ft vines. I’ll underplant with Sugar Sprint snap peas (about 2 feet tall) and Pisello Nano peas (only 1 foot). Recommended companions for peas are daisies and cosmos, so I’ll mix these in too.

I’ve already planted a couple of the zigs of the trellis with peas. Once these sprout, I’ll plant more zigs (or zags). When they sprout, I’ll do another sowing, etc. This succession sowing should extend the harvest. Not so important for the sugar snaps, which had an incredibly extended season last year, or for the Capucijner soup peas, which I’ll dry and collect for winter anyway, but a good idea for my green shell peas.

To the front of the path (between the boards and the stone walkway), will be brassicas (kale and broccoli). These will be covered with a white, light weight row cover May to Sept because of cabbage worms.

Right now I have a small plot of fava beans planted in front of the plastic bottles. I had hoped to grow the favas at my new Community Plot this year, but I will not get an assignment until April 12. I’ll try a second seeding there I hope.