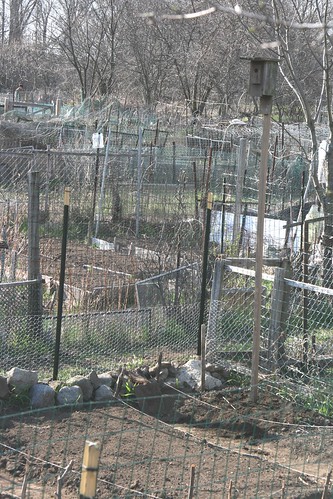 My dad helped me with putting up a bird house at my plot. Well, he actually transported it, dug the hole, and put it up for me. I can’t say I did more than take the photos. Thanks Dad! Its an old chickadee house that was in my backyard with no residents for many years. I’m hoping it may find an occupant at the gardens.

Here’s an update on the bluebirds nesting in Rock Meadow. My parents and I went for a walk and checked the houses where I previously saw nesting bluebirds. I had seen three pairs. (My photos are here.) But that was before the tree swallows arrived. Now we could only find one of the pairs left. Its in a house at the far end of the meadow. The swallows are very aggressive and as we watched, it they swooped and dove at the bluebirds. I wonder if the bluebirds will stay to raise a family? Doesn’t really seem likely. I’ll keep an eye on them. Here’s an excellent article on swallow-bluebird competition, that Jim pointed out to me. I was pleased to read that, though swallows are aggressive, bluebirds are larger and stronger and are able to defend themselves. Go bluebirds!