Last year I used a V-frame structure for my peas, which did not like. It was made from six poles arranged as three Vs, with green plastic mesh stapled along each side of the frame. I found it was hard to pick peas that grew in the center of the frame, the back half didn’t get enough sunlight, it took up too much space and it didn’t look nice.

This year I have planted three types of peas and needed three trellises. So I tried three different types. My son says it looks like I’m trying to communicate with aliens, but then what does he know about gardening. Anyway, one trellis is an old structure I found in my neighbor’s trash. That was the easiest to put up. Another is a zig-zag, post & string trellis. The third is a straight post & string trellis. I’ll have to see which works best – and if I pick up any messages from outer space. 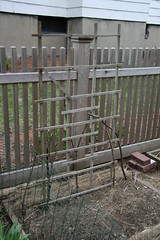 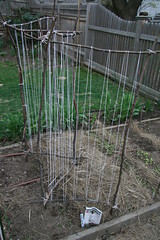 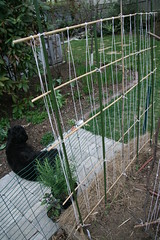 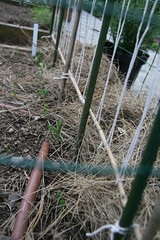